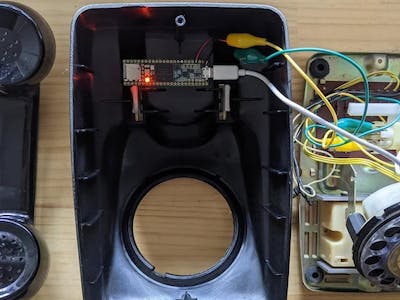 After a very strange 2020, and now 2021, many of us are still communicating with others over Zoom for work and other reasons. After developing a Bidirectional Physical Zoom Mute Button using a Teensy 4.0 and a cardboard enclosure, Dice Yukita decided to take it up a few levels with his “Zoom Phone.”

Electronics-wise, the project is fairly simple, hijacking the receiver contact states from a rotary phone via an HID-capable dev board to trigger the mute/unmute state on a Zoom call. The computer uses Swiftbar to scrape the mute state of Zoom in a similar manner to the first iteration, which allows it to coordinate with the Zoom app GUI.

The microphone and speaker are salvaged from a Bluetooth device and inserted into the headset. While talking and listening this way can be convenient, when you put the phone down to mute a conversation, it also means you can’t hear the other voices on the speaker, which would seem to be somewhat inherent problem with such a setup. The rotary dial is unused, but makes for an interesting fidget toy.

As opposed to most headsets, the way this device works now, is very much a “hands-full” operation, forcing you to actually concentrate on conversations when holding the phone. You can also physically cover the microphone as another mute method, pick up the handset to show that you want to talk, and sandwich it between your neck and shoulders to indicate/reveal that you’re probably doing something else.

As an interaction designer, Yukita found the whole thing beautiful in the Zoom context, and it’s certainly neat to see how older technology can mesh with new concepts!