Stablecoin trading pairs make up the largest portion of the trading volume in cryptocurrency. But there is a problem. Not all DeFi is decentralized due to the inherent nature of stablecoins.

Since stablecoins are pegged to centralized fiat currencies like the US Dollar, they are not entirely decentralized. This is a big problem because if a regulator decides to shut down these stablecoin issuers, it could paralyze the DeFi landscape and rewind the clock of crypto progress by a couple of years at the very least.

As big banks start to notice how their billions are leaving their balance sheets and are heading onto crypto exchanges and DeFi protocols, they’re pushing regulators to take some action. And this is one of the many reasons for the rapid rise of Terra currently. Terra’s stablecoin UST has been gaining traction as a decentralized alternative to BUSD, USDC, and USDT.

Let’s explore some of tTerra’spromising features and protocols, its recent updates, and where it is headed.

Founded in early 2018 by Do Kwan and Daniel Shin, Terra was built by a software development company named Terraform Labs based in South Korea, which was intubated by Terra Alliance.

After raising around $33 million across numerous funding rounds in 2018, the Terra mainnet finally went live in April 2019. Terra is a decentralized ecosystem of stablecoin tokens that are collateralized by the LUNA coin. The first Terra stablecoin token was for the South Korean Won named KRW. 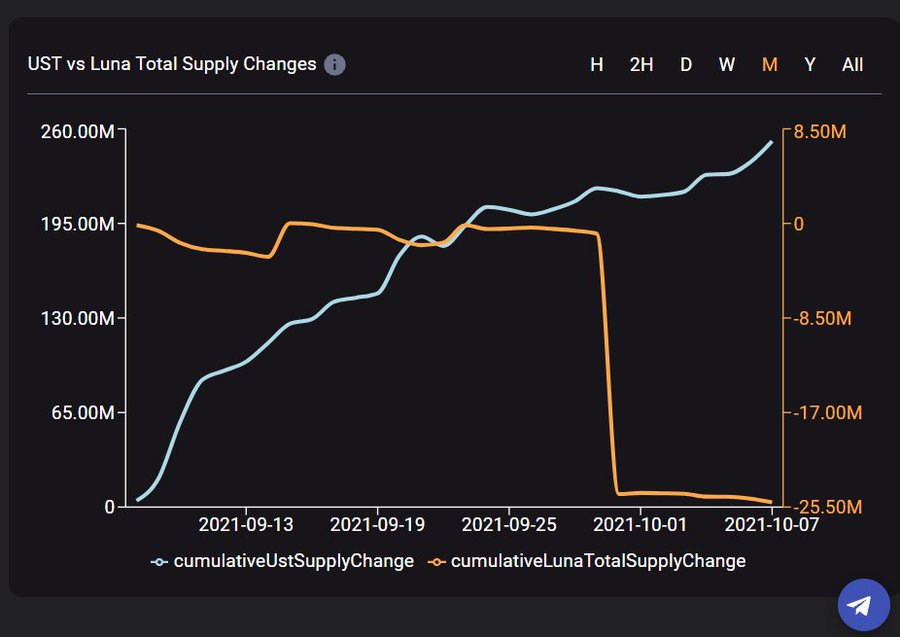 To mint, any Terra stablecoin, the same amount of LUNA must be burned. For instance, if one LUNA is worth 10 dollars, then burning one LUNA should mint 10 UST.

On the other hand, if UST is trading at, say, 40 cents, UST holders can burn their tokens to mint new LUNA and make a 2x profit. This brings down the amount of UST in circulation and restores the one-dollar peg. Hence, every time LUNA is burned to mint UST, a small gas fee is taken and stored into a community-based treasury in order to fund new Terra protocols and projects. 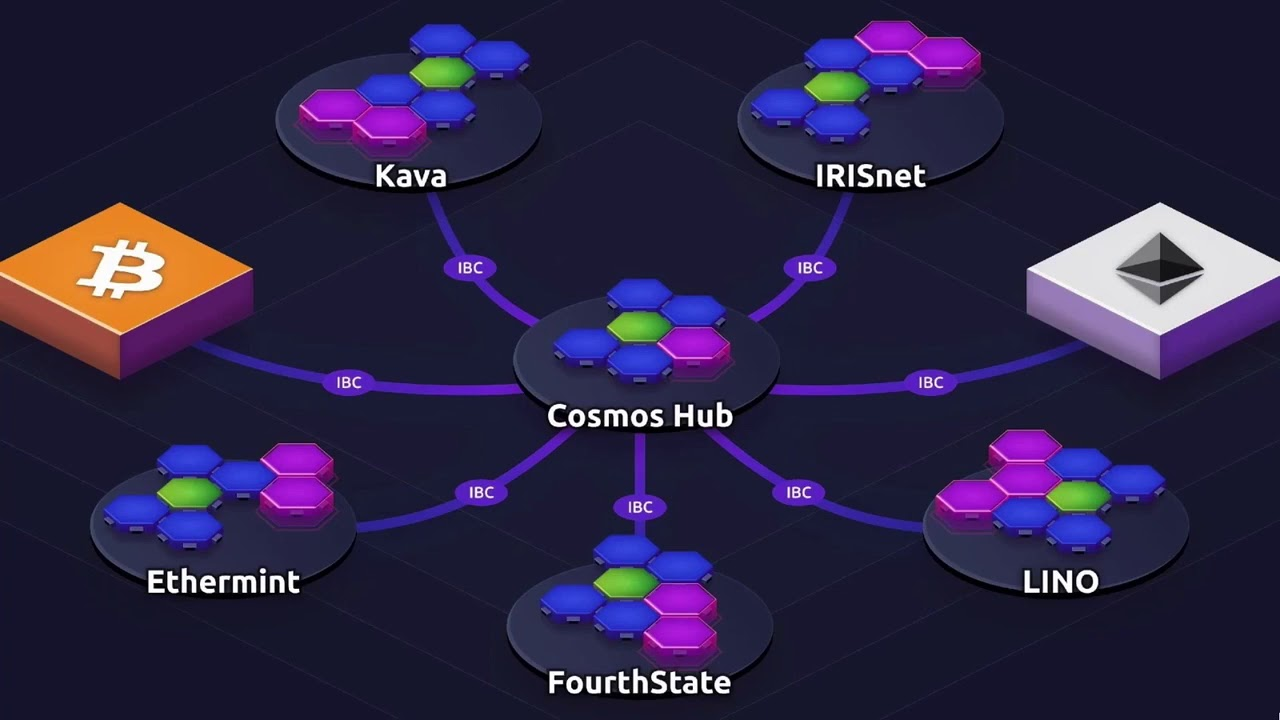 This innovative system was made possible by using Terra’s Proof-of-Stake blockchain, which was created using the Cosmos SDK. Terra’s blockchain is able to handle a few 100 transactions every second and has 130 validators. As oracles check the exchange rates between Terra’s different stablecoins and LUNA, these might double.

Although there is no minimum stake required for validators on Terra, the amount of LUNA staked must be large enough to place in the upmost 130 validators. Every assigned LUNA is counted towards this number. The staking rewards for both delegators and validators are currently almost near 6% per year, and every staked LUNA takes 21 days for withdrawal.

You should note that any misbehaving validators are slashed off of their staked LUNA by Terra. LUNA’s initial supply of 1 billion is allocated as follows:

Another important thing to note is that Terra has a maximum dynamic supply of 1 billion if you want to be precise.  This implies that if less than 1 billion LUNA exists, then new LUNA are eventually minted, and if there is more than 1 billion LUNA, the excess tokens are gradually burned. 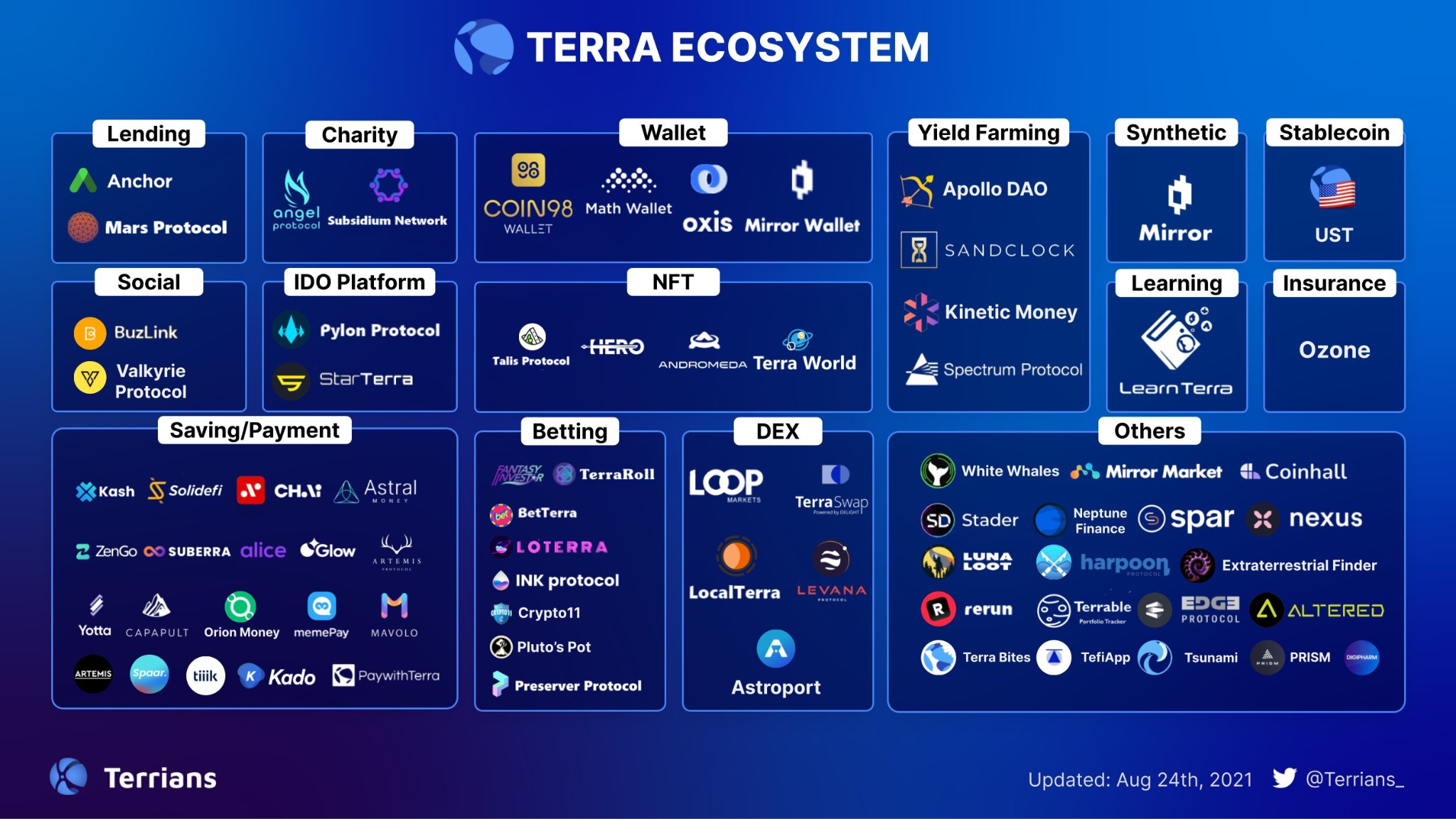 Over the past few months, Terraform Labs has invested millions of dollars on crypto projects that are supposed to leverage Terra’s UST stablecoin. Terra has a stable saving protocol called Anchor along with a synthetic stock trading platform named Mirror. 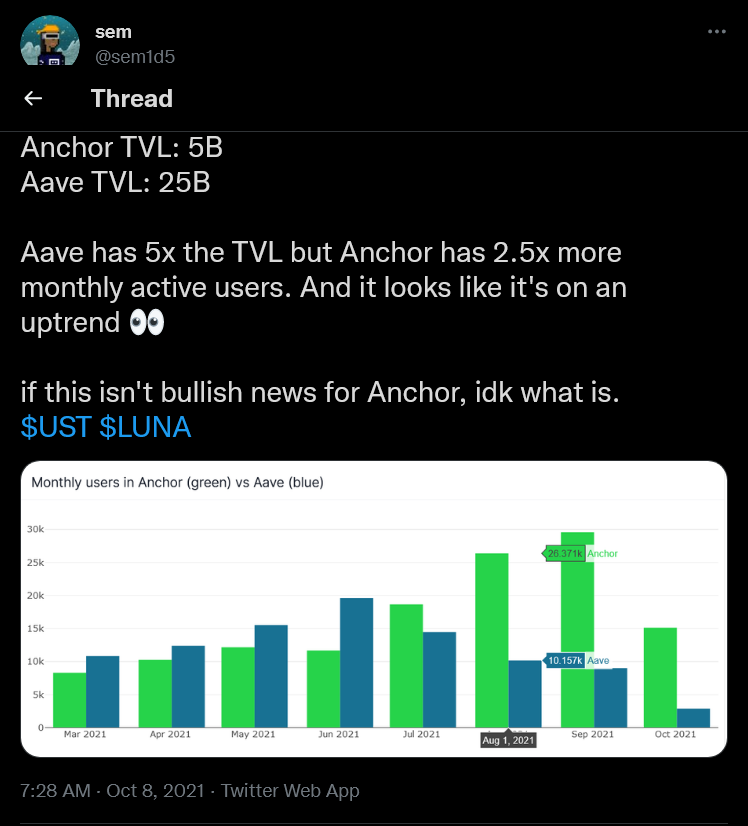 Anchor protocol is on its way to becoming one of the top DeFi protocols (credit: sem/Twitter)

Terra’s first project to get some funds was in March with the help of Kash, a front-end user-friendly application that is connected with all of Terra’s top protocols. 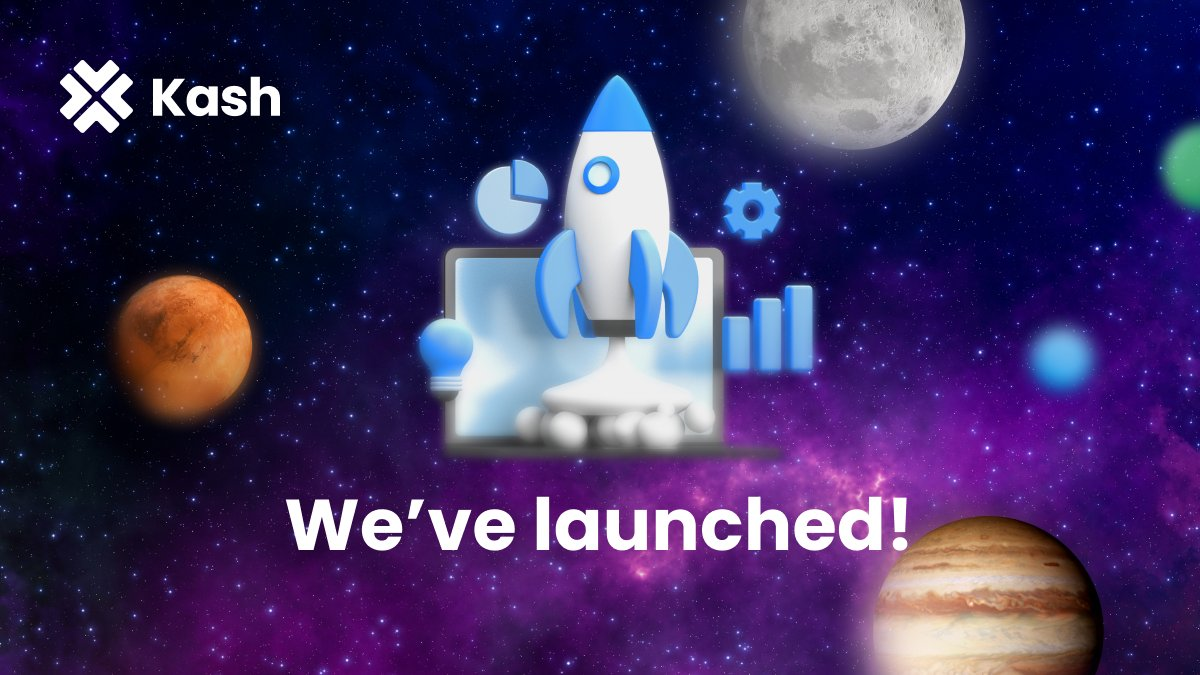 The various new protocol launches and numerous funding news by Terra have fueled the rise of LUNA a lot. All effects by Terra boil down to the rapid increase in demand for LUNA to mint new UST, whose market capitalization has also grown tremendously over the past few months.

This massive rise in demand for UST is mainly due to Terra’s DeFi protocols. Moreover, Terra’s team and community have been driving the push towards getting UST on as many cryptocurrency blockchains as possible.

Currently, UST can be found on Binance Smart Chain and Ethereum, with Solana being the next in line. In early August, UST was listed on Coinbase, which essentially sparked the Terra rocket to the moon. 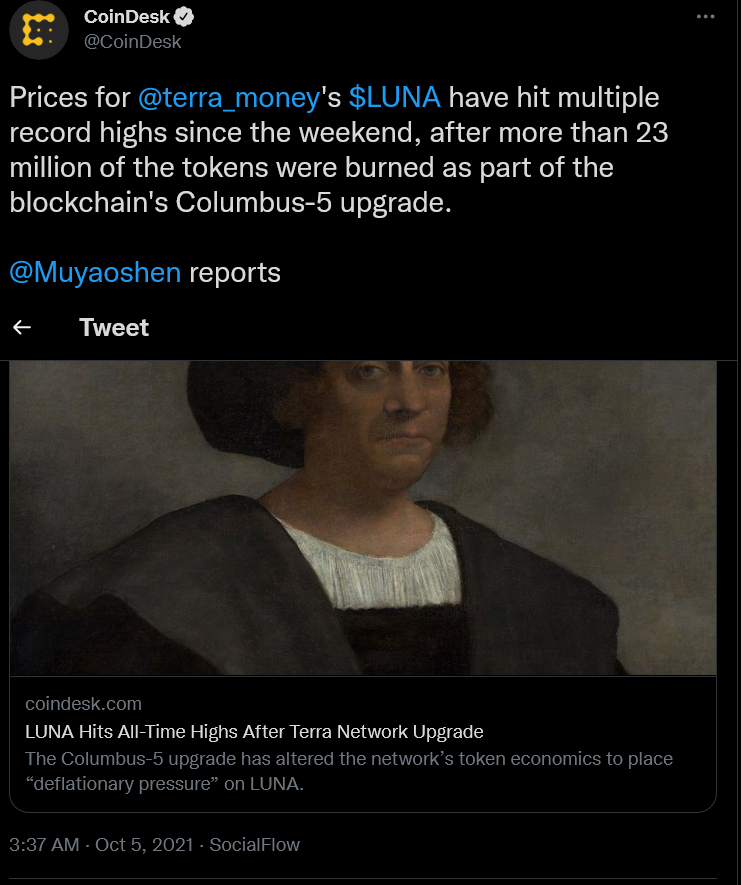 Now, this begs the question, how high would LUNA’s price go? The answer seems to be in the promising nature of Terra since LUNA’s market cap is just twelve billion dollars. LUNA could probably hit $100 by 2022 if the demand for UST keeps rising at the current pace. 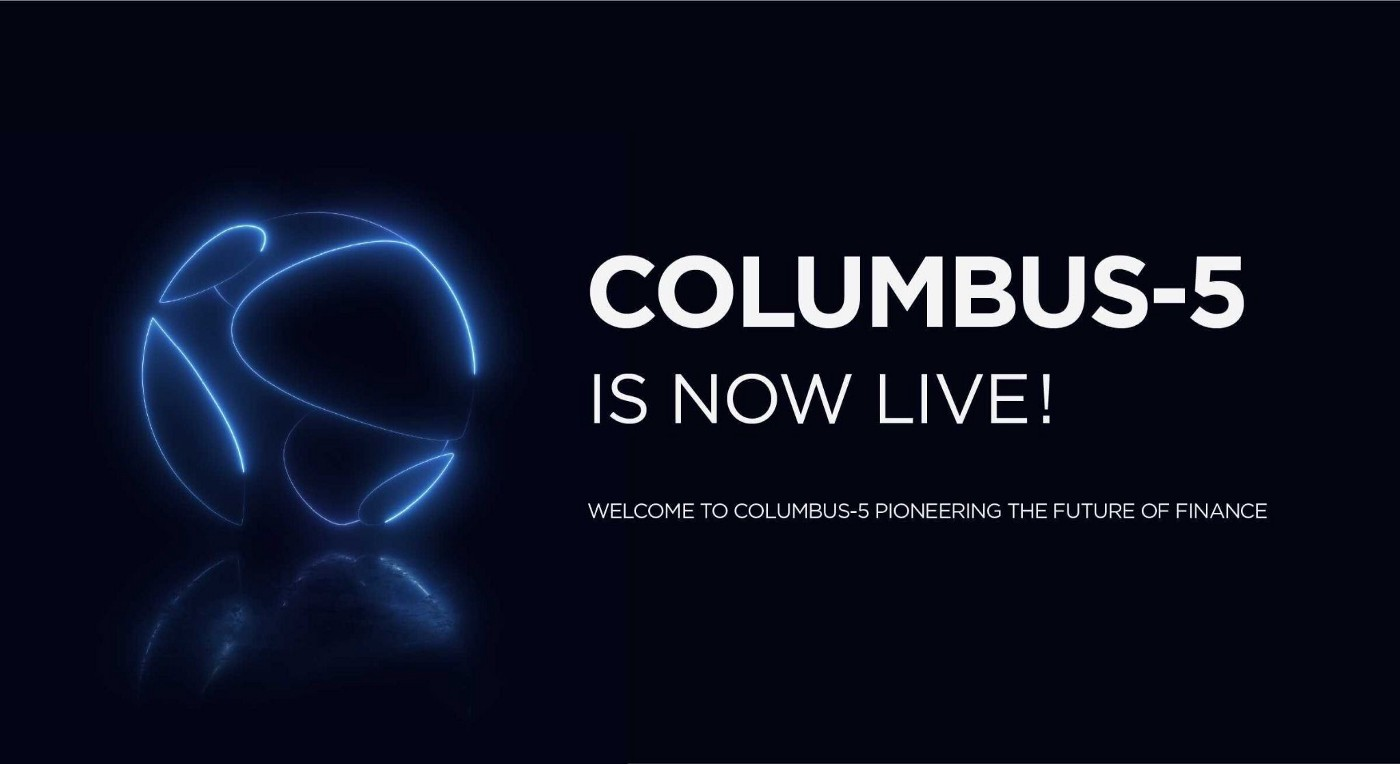 When it comes to Terra’s plan for the future, they just recently launched their latest mainnet called Columbus 5, which introduces three new features to its blockchain. 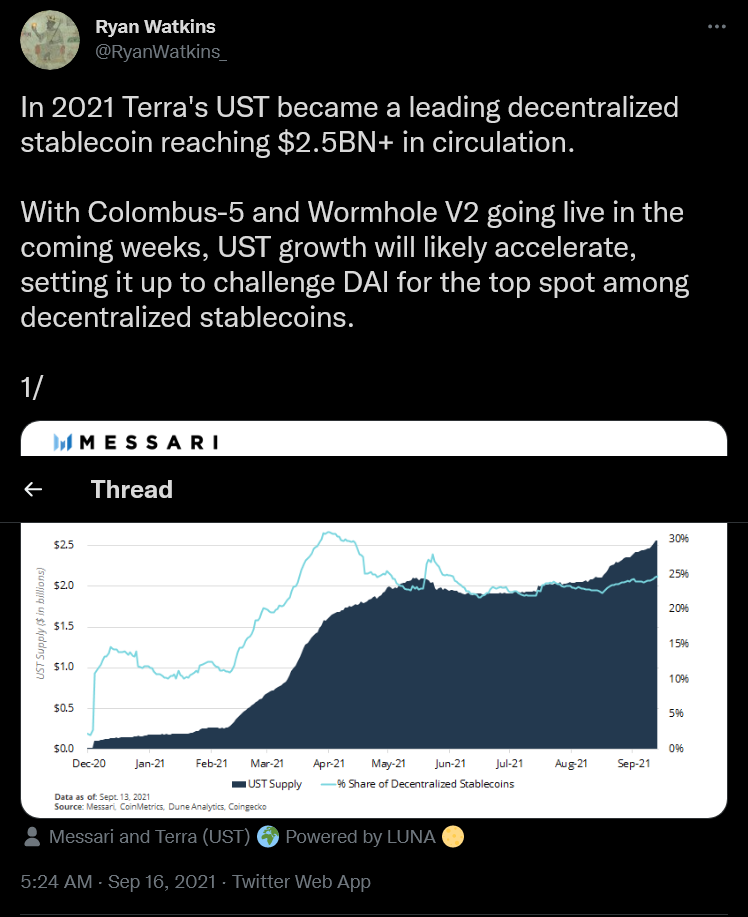 The community treasury is already packed with tons of funds with an estimate of over 2.8 billion dollars, so the Columbus 5 update will burn all the seniority fees, and instead of redirecting them to the treasury, it will add deflationary pressure on LUNA, which might increase the value of the coin.

The future of Terra is not completely assured, which is the same narrative for almost any crypto company. Still, Terra’s interoperability feature might just be able to push any regulatory damage or liquidity problems it might see in its future.

With just a little bit of luck and engagement by the crypto community, Terra might gain enough adoption to survive on its own, and individuals may find themselves rushing to UST if the regulators turn to take out USDC, USDT, and BUSD.