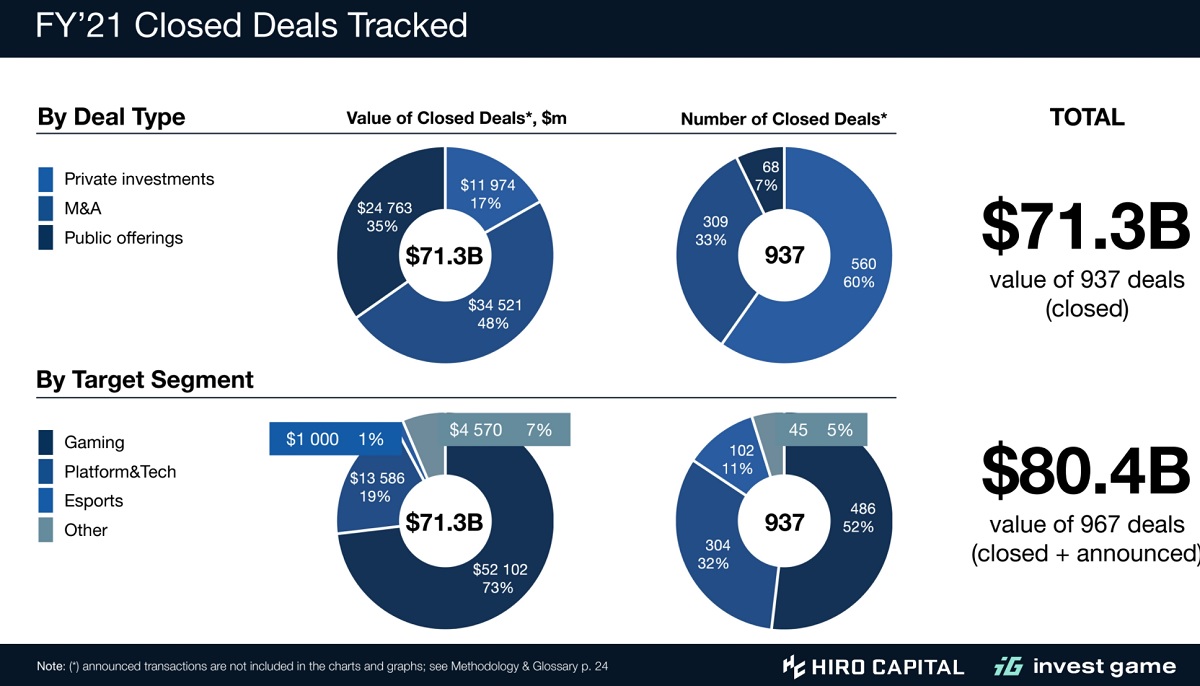 GamesBeat Summit 2022 returns with its largest event for leaders in gaming on April 26-28th. Reserve your spot here!

In 2021, the total number of closed and announced deals in games reached $80.4 billion in value, according to a new report by InvestGame. And in just one month in January, we have already exceeded that with more than $85 billion in announced deals.

Microsoft’s $68.7 billion purchase of Activision Blizzard, Take-Two Interactive’s $12.7 billion purchase of Zynga, and Sony’s $3.6 billion acquisition of Bungie will inspire even more deals to come, InvestGame predicted. And Drake Star Partners estimates we’ll cross $150 billion in deals in 2022. And that will mean something shocking for both gamers and game developers: change is coming.

That’s one of the themes we’ll examine at our GamesBeat Summit 2022 event on April 26 (in Los Angeles) and April 27 to April 28 (online only). And when we look into the future, I think we’ll find this is a game of trillions, not billions.

The volume of deals means that the core of the industry is going to change. That means disruption. It means both pain and opportunity. GamesBeat Summit is designed to bring the thought leaders together to understand and explain that change. We will have the speakers and the right people to address the changes, tech-based or otherwise, that are rapidly changing the status quo. The old game industry you knew — it’s never going to be the same.

If you have any FOMO, then come to our event. We want to gather the people and the speakers to make this a must-attend event. Then we invite you to consider this is a should-attend event. We would welcome your support for what we are trying to do. Our core focus is journalism and being analytical in understanding and explaining a complicated world and industry. We don’t always get the future right. But we lead honest conversations about it with smart people who come at the problems with many different perspectives.

We know, for instance, that we’re going to see growing conflicts and changes with platforms, as we’ve already seen Epic Games square off against Apple. As Ukraine may sadly learn, we’ll see gaming and studios in distant places around the globe affected by geopolitical challenges. We’ll have changes to our audience of gamers when it comes to mental health, diversity, and accessibility. And we will see technological disruption with the onset of user-generated content, the metaverse, and blockchain games.

On the latter point, we have seen the flashpoints. Ubisoft unveiled its first nonfungible token (NFT) in December, and a hardcore gaming fans objected to it. It was a signal that NFTs — which use the transparency and security of the digital ledger of blockchain to authenticate unique digital items — are running into heavy resistance. The advocates for NFTs say they will bring true digital ownership, monetary rewards for gamers, and cross-game portability. But foes say it’s just a new snake oil for monetization and ponzi schemes with crappy games.

We’ll find out in the future if good games are coming that will represent the blockchain view better, with the aim to disrupt the status quo the same way that free-to-play mobile games did more than a decade ago. Mobile and free-to-play now dominate gaming, and it’s why we have three billion gamers in the world.

If we follow the money, we know that blockchain games will be important. Forte, which focuses on blockchain game infrastructure, had the biggest funding round in gaming last year with a $725 million raise. InvestGame found that blockchain gaming accounted for $3.1 billion in funding, or 26% of the private capital raised in games in 2021.

But we also have learned we can’t just follow the money. The other canaries in the coal mine include game developers, publishers, platforms, brands, advertisers, and gamers. We’ve seen gamers thwart the plans of Team17, GSC Game World, and others because they proposed NFTs that had little visible value for the player and a variety of risks.

Axie Infinity, a model for “play-to-earn” that lifted gamers in the Philippines and developing countries with monetary payoffs that became critical sources of money in the pandemic, has seen its fortunes sink as the price of its token declines and its economy takes a hit. Sky Mavis is in a hurry to make changes to retain its players.

And yet I get a sense that the argument here about NFTs is but a waystation on the way to the big game. And, yeah, gamers might very well be an obstacle that stands in the way of the grand plans of many companies, which should definitely listen to the concerns of game devs and players.

The big game of trillions, not billions

I look forward to a lot of discussions about what the smart plays will be, starting with meeting a lot of game people next week at the Dice Summit in Las Vegas. We’ll see antitrust become one of the seminal issues in gaming as regulators figure out if Microsoft’s Activision Blizzard deal should be approved.

Microsoft president Brad Smith said on CNBC last week that the company is adapting to changing tides of regulation, rather than fighting against it. Microsoft could gain an overwhelming lead over rivals with its subscription game service by adding Activision Blizzard’s Call of Duty and other titles to the Xbox Game Pass. But Microsoft will alleviate the antitrust fears by letting Sony and even Nintendo platforms have access to Call of Duty for years to come.

Microsoft is also creating a new universal app store, which will let players download games and use them on any platform that they want, like mobile, consoles, and PCs. Right now, users have to go to a different app store for pretty much every device they use. This means a new kind of game company — one that combines PC, console, and mobile games together under one house — will become the standard way of operating.

That means we’ll see Microsoft aided by King’s mobile games, Take-Two bolstered by Zynga’s titles, and Electronic Arts aided by Glu Mobile and Playdemic. Mobile games seemed like they were in their ascendancy — until Apple dropped the hammer by making it harder to target gamers with ads in order to protect privacy.

The tech supporting these platform-agnostic game giants will all be layered in the cloud, and we’ll see the world — or maybe the metaverse — of Microsoft square off against the world of Tencent. This metaverse is going to happen, if only because it may be the only thing that will help us forget about and escape this accursed pandemic.

As Michael Metzger, partner at investment bank Drake Star Partners, told me, “I still see a ton of activity in the space. I don’t really see it slowing down. It feels like some of the public companies are even more focused on acquisitions.”

The deals are coming to gaming because the pandemic made it clear to investors that gaming was racing ahead even as so many other industries hit the brakes.

The easy deals are being done, but more difficult deals will follow, like cross-border or cross-continent deals happening, said one investment banker who spoke to me on background. Electronic Arts is doing fine as a third-party game publisher valued at $36 billion today. Alina Soltys, cofounder of Quantum Tech Partners, has figured out that game companies are selling for 4.2 times revenues now, a huge price increase from a few years ago when the multiples were one to two times revenues.

But what happens if one of these big parties — a platform owner, an entertainment company, or an infrastructure player — comes along and offers $50 billion or $60 billion for EA? Rather than wait around to hire people, Microsoft has decided to find talent by acquiring lots of studios.

Companies like Nintendo will defend their traditions and the games that fans love behind walled gardens. But how long will they hold out? How will they be affected in a world where company like Facebook/Meta is willing to invest (or lose) $13 billion a year in order to build the metaverse, or the next version of the internet that embraces spatial technology?

A lot of companies are going to be stuck in the middle of the ecosystem wars. Our views on things like surveillance capitalism, immersive advertising, elitist hardware pricing, platform taxes, gamer rights, accessibility, censorship, developer freedom, the need to support triple-A games, free-to-play, play-and-earn, and the best way to play games are all going to determine where we stand in these wars for the hearts and minds of gamers.

Anyone who wants to win checkmate in the metaverse will have to come to the game companies. The metaverse will be built with game engines, and no one knows how to use them better than game developers. Games are sticky, social, and they come with highly engaged and dedicated lifelong fans. With such lofty things at stake, what giant company — particularly those that are seeing passive entertainment lose to interactive — wouldn’t want to pick up a user-generated gaming company like Roblox for the pocket change of $32 billion (its current stock market valuation)?

Here’s what’s at stake. Anyone who aggregates games, discovery, distribution, social, and anything else of value in the chain will be headed toward trillions of dollars. One of these trillion-dollar companies could buy the entire game industry, with only antitrust law to stand in its way.

These aren’t necessarily my opinions, by the way. I’m not saying that all of this future should happen. And I wouldn’t want to overhype the situation any more than I already have. After all, this is likely to be a wavy line on the way to trillions, not a straight line. It could even be a monumental crater.

No, some of these thoughts I have gathered from the opinion of one investment banker (among multiple) that I spoke with. That banker is just one of the smart people we’ll try to get to speak at our event. Because that banker is thinking that way, in trillions of dollars instead of billions, we know that someone with that money is probably going to try to pull it off.

“They’re playing for the big game,” the banker said. “We’re in the trillion-dollar era.”

Like I said, we don’t want to just follow the money when we think about the future of gaming. I want to hear more perspectives. I’m looking for speakers on this thread, and women speakers can apply here. I hope to see you there.

GamesBeat's creed when covering the game industry is “where passion meets business.” What does this mean? We want to tell you how the news matters to you — not just as a decision-maker at a game studio, but also as a fan of games. Whether you read our articles, listen to our podcasts, or watch our videos, GamesBeat will help you learn about the industry and enjoy engaging with it. Learn More

Knowledge goes to the cloud in real-time, and so is ScyllaDB 5.0

ADU 01260: How can pilots determine on utilizing a selected software program?

ADU 01260: How can pilots determine on utilizing a selected software program?