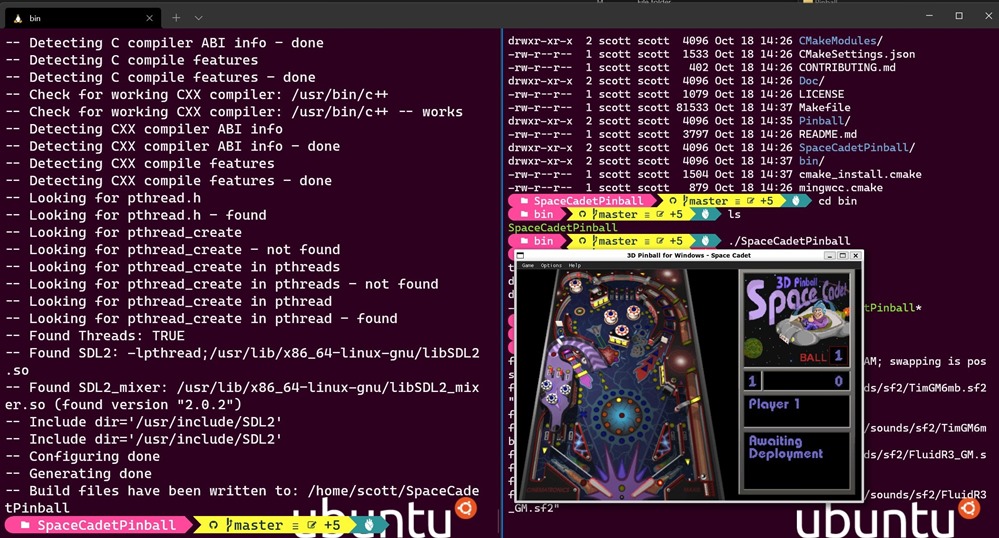 Award for longest blog post title ever? Andrey Muzychenko has a great github repository where they decompiled the 25 year old Space Cadet Pinball application from Windows 95/XP and then recompiled it for Linux (and really any platform now that it's portable code!).

NOTE: Because this is a decompilation/recompilation, it doesn't include the original data files. You'll need those from a Windows XP disk or ISO that you'll need to find yourself.

I recently did a YouTube where I showed that Windows 11 runs Graphical Linux Apps out of the box with WSLg.

Here, they've taken a Windows 95 32-bit app and decompiled it from the original EXE, done some nice cleanup, and now it can be recompiled to other targets like Linux.

If you don't think this is cool, that's a bummer. It's an example of how powerful (and fun) virtualization has become on modern systems!

I just launched WSL (Ubuntu) and installed a few things to compile the code:

Then I cloned the repo under WSL and built. It builds into bin and creates a Linux executable.

I am a digital hoarder so I have digital copies of basically everything I've worked on for the last 30 years. I happened to have a Windows XP virtual disk drive from a VM from years ago that was saved on my Synology.

I was able to open it and get all the original resources and wav files.

Then I copy all the original resources minus the .exe and then run the newly built Linux version…and it magically pops out and runs on Windows…as a graphical Linux app.

Scott Hanselman is a former professor, former Chief Architect in finance, now speaker, consultant, father, diabetic, and Microsoft employee. He is a failed stand-up comic, a cornrower, and a book author.