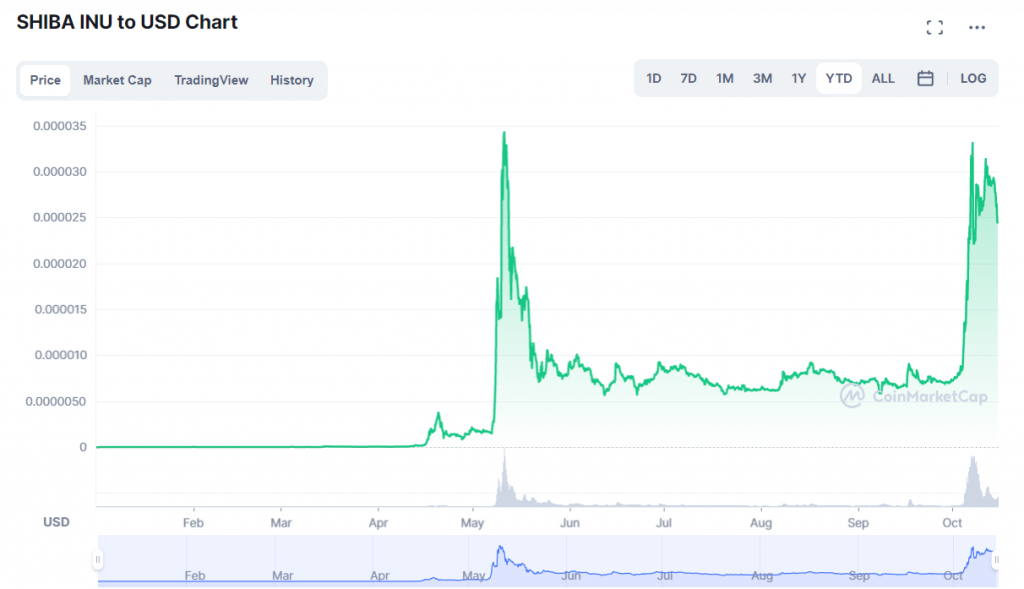 Shiba Inu, one of the world’s most valuable cryptocurrency assets by market cap, has seen immense retail demand in the last few months. The meme coin started this year with a market cap of a few million dollars, now the digital asset has a market cap of approximately $10 billion.

Dogecoin’s largest competitor developed a strong following in the last 8 months. While the biggest reason behind SHIB’s recent rally is its retail craze, institutional investors have started considering Shiba Inu as a good portfolio diversifier. Amid the latest price surge, large SHIB transactions have surged substantially, indicating that Shiba Inu whales are planning to hold the world’s 21st largest cryptocurrency for the next few years.

So, is it only FOMO (fear of missing out) or some serious investors have started adding Shiba Inu to their crypto portfolios? Finance Magnates asked crypto experts about their views on the latest SHIB rally and the importance of Shiba Inu as a portfolio diversifier.

“6 months ago, if someone had asked me about “social awareness” tokens (meme coins) such as SHIB or DOGE, I would have NEVER considered them an investment. However, 6 months later, it is clear for me to see that you CANNOT ignore the social power of these tokens in terms of Return on Investment. So, there may be something to these tokens,” Johnny McCamley, Founder of CryptoClear, commented.

“The goal of SHIB was and still is to catch up to DOGE and ultimately surpass DOGE. It isn’t too far away at $10 Billion (SHIB), $30.8 Billion (DOGE). Again, this [is] illustrating that community is an extremely powerful catalyst- for tokens with close to zero utility,” he added.

While Shiba Inu is the biggest competitor of Dogecoin, its dynamics are completely different from other digital assets like XRP, BTC or ETH. McCamley believes that a meme coin portfolio is a risky option but an option at least.

“So, I have decided to create a ‘meme coin’ portfolio alongside my DeFi, Smart Contract portfolios. I have chosen to allocate $5K to this Meme tokens portfolio-spread amongst the top meme coins. To me, this is a complete ‘gamble’ riding on the social power of the community behind the token to drive the price, unlike actual utility for other Crypto Assets in my Portfolio. To me, this meme coin portfolio is the riskiest investment portfolio I have made EVER, but it is clear to see now, for me, that I should allocate a very small amount of capital to these projects, don’t sleep on meme coins,” McCamley said.

Joaquim Matinero Tor, a Blockchain Associate at Roca Junyent, said that he is not sure about the scalability ambitions of the Shiba Inu project, but FOMO is playing a major role in the latest price rally.

“Shiba Inu is still part of the FOMO strategy of most crypto adopters waiting for a new DogeCoin and obtain more than 7400% in less than 5 months. I’m quite sure SHIBA will jump also into an NFT ecosystem, but I’m not sure about its project and scalability ambitions. I could be wrong but nowadays only crypto-fans are interested in this kind of token,” Tor commented.