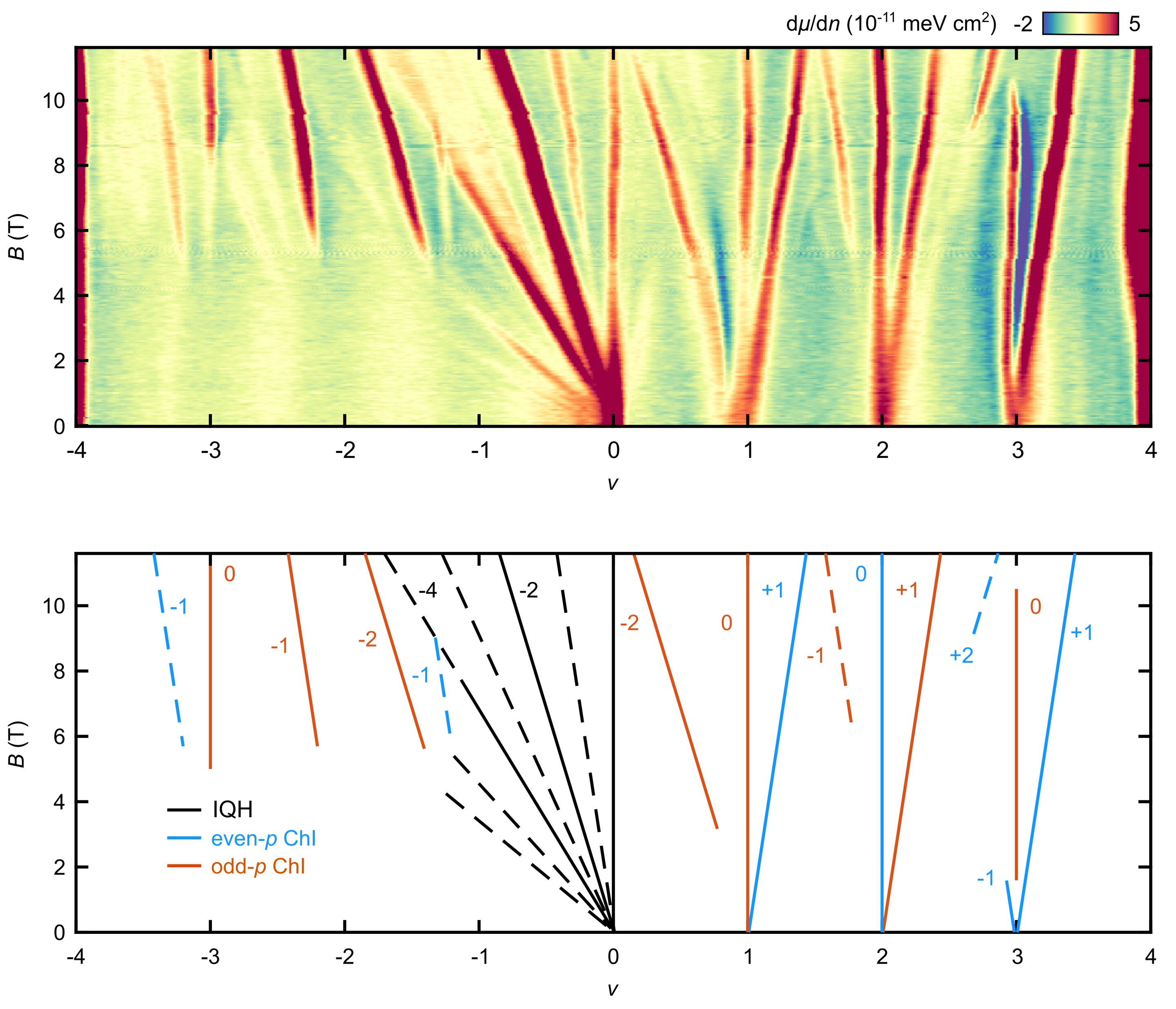 Magic-angle twisted bilayer graphene is a material made of two sheets of graphene placed on top of each other, with one sheet twisted at precisely 1.05 degrees with respect to the other. This material has been found to be a very promising platform for studying different phases of matter, as it combines metallic, superconducting, magnetic and insulating phases in a single crystal.

Magic-angle twisted bilayer graphene is known to support flat energy bands with topological properties that can be accessed under specific conditions. Recent studies have found that strong interactions can isolate these topological bands, allowing the system to support so-called Chern insulator ground states. In Chern insulator ground states, the bulk of the material is insulating, yet electrons can propagate along the edges without dissipating heat.

Researchers at Harvard University, Massachusetts Institute of Technology (MIT) and National Institute for Materials Science in Japan have recently carried out a study aimed at investigating Chern insulator ground states in twisted bilayer graphene. Their paper, published in Nature Physics, provides evidence of the existence of a sequence of incompressible states with unpredicted Chern numbers in this fascinating material.

“While the Chern insulators reported to date follow a simple sequence corresponding to spin-valley symmetry breaking, our paper reports numerous new Chern insulators in which electron-electron interactions break the translation symmetry of the lattice,” Andrew Pierce, one of the researchers who carried out the study, told Phys.org.

Pierce and his colleagues gathered a series of measurements using a scanning single-electron-transistor microscope. This instrument can be an extremely sensitive local detector of electrical charge.

“We take advantage of our microscope's spatial resolution to identify the most pristine, disorder-free regions of the device, where we observe signatures of fragile topological insulating states that are not visible in resistivity measurements,” said Yonglong Xie, a co-author on the study.

In their experiments, Pierce and his colleagues unveiled a sequence of incompressible states with unexpected Chern numbers observed down to zero magnetic field. In addition, they found that the Chern numbers for eight of these states cannot be captured by theories in which the bands in magic-angle twisted bilayer graphene are sequentially filled. The researchers showed that the emergence of these unusual phases could be a consequence of a broken translation symmetry.

“The realization that unusual translational symmetry broken states are present in magic angle graphene expands the repertoire of correlated and topological behaviors in this system,” said Pablo Jarillo-Herrero, Cecil and Ida Green Professor of Physics at MIT. “In fact, such translational symmetry broken states are ubiquitous in quantum materials, but they can be investigated in much more detail in magic angle graphene, which could lead to a deeper fundamental understanding of their origin, with lessons that may be broadly applicable to other correlated materials.”

In the future, the findings gathered by this team of researchers could have important implications for the study of Chern insulator states in magic-angle twisted bilayer graphene, as well as symmetry breaking in other materials, such as high-Tc superconductors. Overall, this study significantly extends the known phase diagram of magic-angle twisted bilayer graphene and sheds light on the possible origin of the close competition between different correlated phases within it.

“An important question for future studies is whether translation symmetry breaking favors or disfavors superconductivity in magic-angle twisted bilayer graphene,” said Amir Yacoby, Professor of Physics at Harvard. “Our work also raises the possibility of discovering new topological phases of matter in magic-angle twisted bilayer graphene beyond the states reported here, especially those that may support exotic types of quasiparticles.”

This document is subject to copyright. Apart from any fair dealing for the purpose of private study or research, no
part may be reproduced without the written permission. The content is provided for information purposes only.