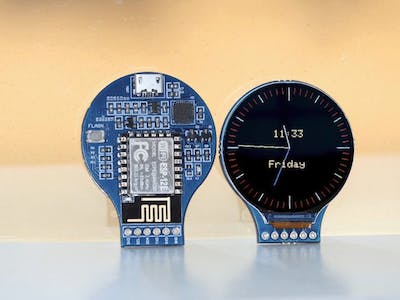 Om Singh and SB Components have launched a crowdfunding campaign for a pair of microcontroller-enabled full-color displays in an eye-catching round design: the Raspberry Pi RP2040-based RoundyPi and wireless Espressif ESP-12E-based RoundyFi.

“Round LCD displays are in demand these days, as it gives a compact and powerful look to your project,” says Singh of his latest creation. “RoundyPi is a round LCD display based on RP2040 along with compact and stylish 1.28-inch display module of 240×240 resolution, 65K RGB colors, clear and colorful displaying effect.”

The RoundyPi board is based on the single-chip GC9A01 driver, linked to the eye-catching 1.28″ 240×240 round LCD fitted to the top of the board. A micro-USB connector is provided for data and power, while an unpopulated pin header to the bottom breaks out four general-purpose input/output (GPIO) pins plus ground and power.

The rear of the board houses a microSD card slot, designed for storage of images to be displayed on the LCD. The software is handled via the RP2040 port of CircuitPython, with Tyler Crumpton's GC9A01 driver; examples are provided for using the microSD card, displaying images, and displaying data from a connected air quality monitor.

The RoundyFi, meanwhile, uses the same display but swaps out the RP2040 in favor of the Espressif ESP-12E, losing the microSD slot but gaining 802.11b/g/n Wi-Fi connectivity in the process. A CP2102 chip is included for USB connectivity, with again a four-pin-plus-power header to the bottom of the board.

The Roundy family is Singh's second crowdfunding campaign, after an earlier partnership with SB Components for the Barcode HAT: A Raspberry Pi Pico add-on designed to read 1D and 2D barcodes and display the data on an on-board 1.14″ LCD display panel. Rewards for that campaign began delivery in January of this year, though one backer states that they have not yet received their hardware.

Both RoundyPi and RoundyFi are now available to back on Kickstarter priced at £20 for RoundyPi and £25 for RoundyFi (around $27 and $34 respectively) for early bird backers, rising to £25 and £30 (around $34 and $41) respectively through to the end of the campaign — a claimed 29 and 25 percent off the hardware's eventual retail price. All rewards are expected to ship in April this year.

The Webretailer Information Digest for October 7, 2022

A Foolproof Promoting Technique for the Vacation Season