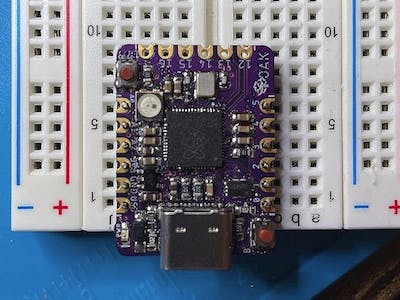 “Cast your project fears away with the Cast-Away RP2040, a small and easy to use RP2040 dev board designed to take your project to the beach,” writes Oak's Seth Kerr of his latest board design. “This board uses the popular Raspberry Pi RP2040, a dual-core Arm Cortex-M0+ microcontroller.”

The Cast-Away RP2040 packs most of the power of a Raspberry Pi Pico into a tiny footprint – and manages some upgrades, too. (📷: Oak Development Technologies)

To this, Kerr has added a USB Type-C connector — an upgrade on the micro-USB found on the Raspberry Pi Pico — and a NeoPixel-compatible SK6812mini addressable RGB (aRGB) LED. There are physical boot and reset buttons located at the corners of the board, and the design has components on the top side only — making it suitable, in combination with the castellated GPIO headers, for surface mounting.

The Cast-Away RP2040 includes 15 GPIO pins, but six are inaccessible if you're using a breadboard. (📷: Oak Development Technologies)

Given its considerably smaller dimensions, though, the Cast-Away RP2040 can't match the larger Raspberry Pi Pico for connectivity: 15 of the RP2040's GPIO pins are brought out to physical headers, including three analog pins, but only nine of these are accessible when the board is mounted on a breadboard. The 3.3V pin offers 500mA output for driving external devices, and there's support for drawing up to 3A at 5.5V from the VUSB pin when paired with a suitable USB Type-C power supply.

Kerr has released Eagle design files for the board under the permissive MIT license on his GitHub repository, while pre-assembled boards have been listed on the Oak Development Technologies Tindie store at $5.50 — but, at the time of writing, were listed as out-of-stock.

The Way forward for Development is Digital, Because of Wi-fi Onsite Connectivity

FaZe Clan companions with MoonPay on crypto and NFTs for esports