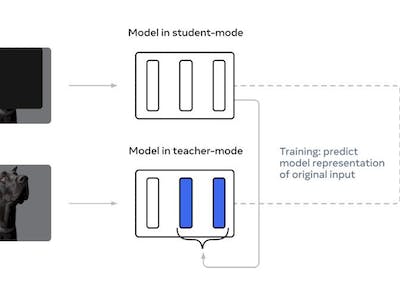 Meta AI, formerly known a Facebook AI, has detailed what it claims is the “first high-performance self-supervised [machine learning] algorithm” capable of operating with speech, vision, and text: data2vec.

“While people appear to learn in a similar way regardless of how they get information — whether they use sight or sound, for example — there are currently big differences in the way self-supervised learning algorithms learn from images, speech, text, and other modalities,” the company explains.

“This discrepancy has been a significant barrier to applying advances in self-supervised learning more broadly. Because a powerful algorithm designed for, say, understanding images can’t be directly applied to another modality, such as text, it is difficult to push several modalities ahead at the same rate.”

“Data2vec demonstrates that the same self-supervised algorithm can work well in different modalities — and often better than the best existing algorithms,” Meta AI notes. “This paves the way for more general self-supervised learning and brings us closer to a world where AI might use videos, articles, and audio recordings to learn about complicated subjects, such as the game of soccer or different ways to bake bread. We also hope data2vec will bring us closer to a world where computers need very little labeled data in order to accomplish tasks.”

The paper describing data2vec is available from Meta AI under open-access terms; the company has also released both the data2vec source code and pre-trained models for speech and natural-language processing, with vision to follow, on GitHub under the permissive MIT license.

The Drone is the Gimbal

The 5 finest surveillance drones of 2022