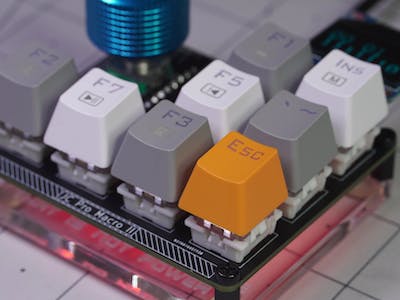 Several months ago I designed and built the JC Pro Macro rotary computer input. This uses an “Arduino” Pro Micro to interface with a computer as a virtual keyboard/mouse, plus five keys, an I2C breakout for an OLED screen, and four addressable LEDs. While it worked as intended, I decided to expand this setup into what I’m calling the JC Pro Macro 2.

This new auxiliary keyboard features eight keyboard-style keys, and adds a smaller mode button, as well as a dedicated reset button for programming. An EC11-style rotary encoder is implemented in a similar manner to the original, but the Pro Micro board is now mounted on the bottom of the device and socketed. This saves space on the top of the PCB, and also means that if the board dies it can simply be swapped out, or even replaced with a more capable Pro Micro-footprint substitute.

What’s really unique about this board is that it has not only SDA/SCL broken out (now in two places), but also breaks out two other GPIO pins (likely 3 the final version) along with ground and power. This gives you the ability to hook up sensors to it, control external electronics, or even use an I2C GPIO expander (or several) to supplement its capabilities even further. I personally have it hooked up to a 5V PC-style fan arranged near my keyboard, which I’m able to activate at the click of a button to cool myself off.

Besides fan control, I really love being able to control music volume with the encoder, as well as scroll through video frame-by-frame. If you’d like one yourself, it's funding now on Kickstarter, with reward-level pledges starting at $14 for the circuit board only, up to $399 for an assembled and programmed five-pack.