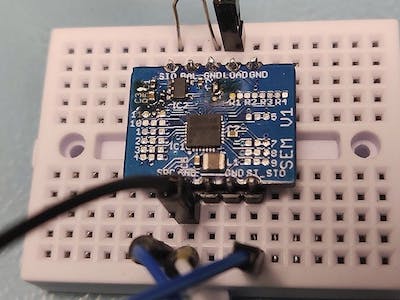 “Recently E-peas announced a new family of energy harvesting PMICs with a very small PCB surface area and the AEM10300 is one of them,” Sikken explains. “I got 5 E-peas AEM10300 engineering samples. The goals was to test the new chip and to make a highly configurable tiny board around it. Since the new chip didn't have a voltage regulator I added a linear voltage regulator on the board (150mA and 0.5uA quiescent current). I also added a low pass RC filter so that the voltage regulator is turned off with a delay.”

That latter feature is key: By turning the voltage regulator off with a delay, it's possible to trigger a warning signal on loss of power so that the host device can safely stop writing operations before running out of juice.

“I have performed basic testing on the AEM10300: It charged the lithium-ion Battery to the right voltage, it performs MPTT [Maximum Power Point Tracking] evaluation, and the ST_STO signal works as specified in the datasheet. The linear regulator also worked as expected, it provided 220mA at 3.3V and 150mA at 2.2V. When the battery voltage drops below 3.5V the ST_STO goes down 0.55s before the LDO was disabled, so the circuit was fully tested for Li-ion batteries.”

This isn't Sikken's first E-peas-driven solar harvesting project: Earlier this year he released three compact boards built around the company's earlier energy harvesting ICs, including one designed for use with lithium-ion capacitors — something he has yet to test on the new board, but the functionality of which he is confident.

Design files for the new board have been published to GitHub under the permissive MIT license, with more information available on the project's Hackaday.io page.