It’s For the Birds (and Robots) 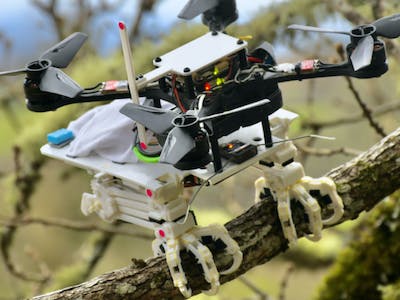 The designs created by even the best of engineers pale in comparison to those found in nature. When we struggle to develop solutions to the problems we face, in many cases, the best path forward is to observe how the natural world deals with that problem, then mimic that approach to the best of our abilities. As a case in point, consider the ability of birds to effortlessly grasp, and perch themselves on, a wide range of complex, irregular surfaces. By contrast, current robotic solutions are greatly limited in their ability to do likewise.

A trio of Stanford engineers have recently published their research in which they detail a nature-inspired aerial grasper for aerial robots. The inspiration for their design came from observing parrotlets, a tiny species of parrot, as they flew between various types of perches.

The perches were of differing sizes, and constructed from materials including wood, foam, sandpaper, and Teflon. Sensors embedded within the perches recorded the physical forces exerted on them during takeoff, landing, and perching of the parrotlets. In addition, a set of five high-speed video cameras captured imagery to assist the engineers in untangling the mysteries associated with the birds’ amazing abilities to adapt to diverse perch materials, shapes, and sizes.

The robot, called stereotyped nature-inspired aerial grasper, or SNAG, is directly modeled on the structure of birds. A 3D-printed “bone” structure is actuated by motors and fishing line, which simulate muscles and tendons. By routing these “tendons” in a similar way to what is found in nature, SNAG is able to passively translate landing impact energy into grasping force, and quickly. The high-speed clutch can be engaged in as little as twenty milliseconds. Once SNAG has locked onto a perch, data from an onboard accelerometer is fed into a balancing algorithm to help the robot stick the landing.

That ability to latch onto perches can also be put to use in other tasks. For example, the researchers were able to hand-throw a variety of objects, and have SNAG catch them in midair. These objects included a prey dummy, a corn hole bean bag, and a tennis ball.

To give flight to SNAG, the device was attached to a quadcopter drone. This setup was tested in the lab, and also in the forests of Oregon to assess the real world abilities of this robotic bird. You could say that the testing of SNAG went off without a snag — the system performed so well that the researchers are not planning any changes to the core functionalities. Rather, as next steps they are focusing on the things that happen before a landing, such as improving the robot’s situational awareness and flight control.