Digital architects rose to the problem – So should databases 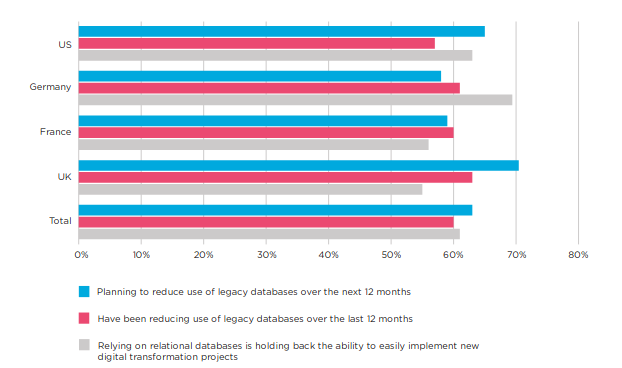 The COVID-19 pandemic has accelerated some digital aspirations and projects, and slammed the brakes on others. A recent Couchbase report reveals that roughly a third of companies interviewed are delaying legacy database upgrades because of the pandemic. A slightly larger group, some 34%, say it has had the opposite effect.

Architects bear much of the responsibility for delivering on these digital aspirations, with the survey revealing that 48% of this group are currently under high or extreme pressure to deliver digital projects – up from 19% a year ago. Fortunately, the numbers also reveal that almost half are on time with their plans. We can surmise that architects are rising to the challenge.

The same cannot be said of the technologies they rely on, however. According to the 450 architects interviewed, an incredible 86% said it was now harder to get the right technology in place for their projects. Legacy databases, in particular, are a major sticking point. Of the respondents, 91% still rely on legacy databases, while 61% say legacy databases make it harder for them to implement new projects.

The pain is real: more than 60% of companies plan to reduce their reliance on legacy databases, and nearly as many are already doing so.

The results of the survey should give pause because they shine a spotlight on a fundamental challenge with software projects. Namely, that the ability to deliver services depends on the underlying technology stack’s support. If that support isn’t present for whatever reason, the rest becomes exponentially more challenging and sometimes impossible to achieve.

It could explain why even though pressure and output among architects has more than doubled, only about half of projects are still on time. Again, we come back to that revealing case in point – the high dependence on legacy technology, and that nearly two-thirds of architects cite these databases as clear barriers.

There is more evidence in the report, including that 61% of companies say legacy databases make it harder to implement new projects. Yet 91% still rely on relational databases, even though they admit those databases do not have sufficient potential to enable modernization to the extent required.

Why is that the case? When asked which technologies have the most potential for improving modernization, the Cloud leads (68%), followed by Big Data (59%), and Automation and Artificial Intelligence next at just over 50% each. IoT, Mobile Applications, and DevOps also rank very high.

Traditional relational databases settle at just below 30%. Yet, weighed against the facts, this likely has more to do with the comfort of a known technology than its actual potential. Indeed, two-thirds of respondents consider relational databases to be a barrier to their success, because of their inflexibility.

If we account for other research findings, the sentiment leans even more towards modern databases. Gartner predicts that by 2022, 75% of all databases will have migrated to a cloud platform. The database market reflects this trend: in 2018 the database management market grew by 18.4% (accumulating a value of $46 billion), and cloud database management systems generated 68% of that growth. A report from Adroit Market Research has similar predictions for cloud database adoption, noting that “the growing need for self-driving cloud databases within the enterprise is one of the major factors anticipated to drive industry growth.”

The case against legacy and on-premises-only databases strengthens when one looks at the reasons people want to move away from them. When asked what would make it easier to reach their goals, 65% of respondents said moving from on-premises databases to the cloud would help, while 49% of digital architects noted that moving to NoSQL databases have been significantly helpful in reaching their goals.

If we take a step back to survey the current software landscape, the fundamentals are clear. Networks, storage, applications, and the other building blocks of software have been undergoing shifts to accommodate today’s modern requirements. Even PCs have become virtualized. It makes complete sense that databases should be a key part of this change.

The findings of this report shines a light on conflicting expectations and experiences among architects: people want to move forward, yet they concede that factors such as legacy databases are holding them back. Fortunately, NoSQL databases are providing better and easier ways for architects, developers, and everyone in the organization to make the switch more effortlessly and seamlessly than ever before. One might argue that legacy databases are the last thing standing in the way of modernization.