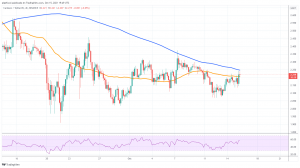 The overall price action in the cryptocurrency market during 2021 has been an extension of the bull-run witnessed over the last months of 2020. Cardano (ADA) has since picked up a strong bullish momentum and managed to steal the show among the altcoins sphere, setting its tone as a real competitor among the majors.

Nowadays, according to Coinmarketcap, ADA exchanges hands at $2.22, with a market capitalization of around $72.90 billion, standing in fourth place in the ranking of the largest cryptos by market cap.

Additionally, the project founded by Charles Hoskinson has seen some improvements on the blockchain that bolstered the confidence among the virtual currency during the first few months of the year. Most recently, in September, Cardano deployed its Alonzo hard fork.

Now, after cracking the $2.00 threshold and consolidating its yearly gains, crypto traders are eyeing next year’s forecasts. AI-based forecast models like WalletInvestors are predicting ADA to reach $4.587 as of press time as a yearly projection, while its five-year forecast says that Cardano’s coin could skyrocket to $14.05.

So, what will be the future of the price after the ongoing consolidation around $2.00 in 2022?

As the year-end period looms and Bitcoin (BTC) is finally breaking through the price of $60,000, which is the latest critical hurdle ahead of its all-time highs, ADA has been trapped in some sort of rangebound that has not been resolved since the lows seen during September 21 at $1.90.

As a contraction has been developed across the board, the 200-period simple moving average (SMA) at the H4 chart is capping gains and limiting any further advance of ADA above $2.40.

That said, bulls need to breach such an area in order to allow a golden crossover of the 50-period simple moving average with the 200 SMA and thus bolstering the bullish case. A golden crossover in the H4 chart is significant in the crypto markets, given that it is a solid signal that could unleash a bullish force that can strengthen it further. If that is the case, ADA could prepare the ground for a bullish 2022 that could take it to test levels of around $5.00.

In fact, another forecast model, LongForecast, put the price of ADA at Q4 of 2022 at around $3.24, which is the average price that Cardano’s coin could aim for in a possible bull-run.

But, is this a too-optimistic view towards ADA? Ask Gene Simmons, rock legend and Kiss bassist who is a well-known ADA investor.

He claimed in February to buying ADA coins and confirmed recently in an interview that he is still holding them, suggesting that his investment has doubled since then. Moreover, Simmons said that he plans to keep holding his crypto coins for at least ‘a decade’.