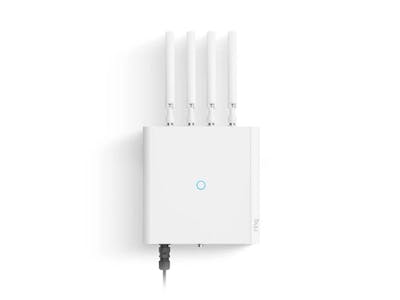 Amazon has announced an expansion of its Sidewalk sub-gigahertz network, designed for the Internet of Things, with the Sidewalk Bridge Pro — a “professional-grade” LoRa bridge designed for businesses, universities, public services, and more.

First announced back in 2019, Amazon Sidewalk aims to provide coverage for Amazon-connected Internet of Things (IoT) devices where Bluetooth, Wi-Fi, and cellular are either unavailable, over-subscribed, or cost-prohibitive. The name comes from the concept of providing connectivity for devices that don't “lose functionality past the front door” — and the company's new bridge is a big part of delivering that, thanks to a dramatically boosted range.

The company claims its Sidewalk Bridge Pro — sold via its Ring subsidiary – can offer connectivity over a five-mile range, features a ruggedized housing for outdoor or indoor installation, and supports optional upgraded antennas. “Amazon Sidewalk Bridge Pro will provide Sidewalk connectivity to devices like sunlight sensors, air quality indicators, and moisture sensors,” the company promises in its unveiling announcement, “in places like commercial centers, parks, and wilderness areas.”

To prove its point, Amazon has been working with organizations to test Sidewalk Bridge Pro installations. A number are to be installed at emergency blue light pole stations at the Arizona State University's Tempe campus, for instance: “The university is unique in that it is a space that encourages new ideas and disruptive technologies to be developed, tested, and iterated upon quickly,” claims University director of digital transformation Bobby Gray. “Our goal is to deploy and test Amazon Sidewalk Bridge Pro to bring smart solutions, like those fitted to the blue light poles, to campus at scale and lower costs.”

Sidewalk is also available for consumer devices, including Amazon's own Echoes and Tile trackers. (📷: Tile)

For those interested in trying the device out for themselves, however, there's one rather big catch: Amazon has not yet received authorization for sale from the Federal Communications Commission (FCC), meaning that — in the company's own words — the bridges may not yet be “offered for sale or lease, or sold or leased, until authorization is obtained.”

More information on the Sidewalk Bridge Pro is available on the company's news page.

Share
Facebook
Twitter
Pinterest
WhatsApp
Previous articleBetter of CES 2022: these are the perfect merchandise at this 12 months’s present
Next articleswift – iOS recreation improvement: how do I take advantage of NavigationView buttons to name a perform from one other class?