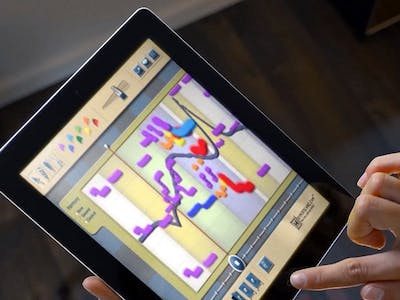 Self-described entrepreneur June Kinoshita is turning her attention to blending the worlds of music composition and art, launching a crowdfunding campaign to release a cross-platform version of an MIT Media Lab invention: Hyperscore.

“Hyperscore is simple, intuitive, and fun to use while enabling children and adults to compose complex, original music without requiring years of training,” Kinoshita explains of the software, originally developed at the MIT Media Lab by a team led by composer Tod Machover. “Hyperscore was previously available only as software running on Windows, which severely limited its use in classrooms and by the public. But we have now licensed Hyperscore from MIT and redeveloped it as a web app that works on any desktop, laptop, or notebook computer with an internet connection.”

New Harmony Line's version of Hyperscore retains the same functionality as its Windows-only predecessor, using a visual environment for composition: Notes are placed on the screen and represented as teardrops of differing length; pitch is drawn as a line; and additional harmony lines can be added to add complexity.

“Thousands of children have used Hyperscore in Machover's Toy Symphony and City Symphony projects, creating compositions that have been performed by renowned orchestras, rock and jazz bands, and numerous other artists,” Kinoshita explains. “This fall, we have been beta testing Hyperscore for the Web in two dozen classrooms in the U.S., Canada, and Germany. Teachers have told us that students are being creative, helping one another with tips on using Hyperscore and wishing that class time would not end. (Now that's music to a teacher's ears!)”

Originally designed and implemented by Mary Farbood and Egon Pasztor at MIT, Hyperscore is claimed by Kinoshita to be “powered by AI” — but while there's certainly some intelligence at work in transcribing the visual doodles into pleasant musical compositions, it's worth noting that Farbood's original thesis on the topic makes no mention of artificial intelligence at all.

The campaign is now live on Kickstarter, with licenses starting at $50 for a year of Hyperscore — a claimed discount on the $95 planned retail price — and release being scheduled for the second quarter of 2022.