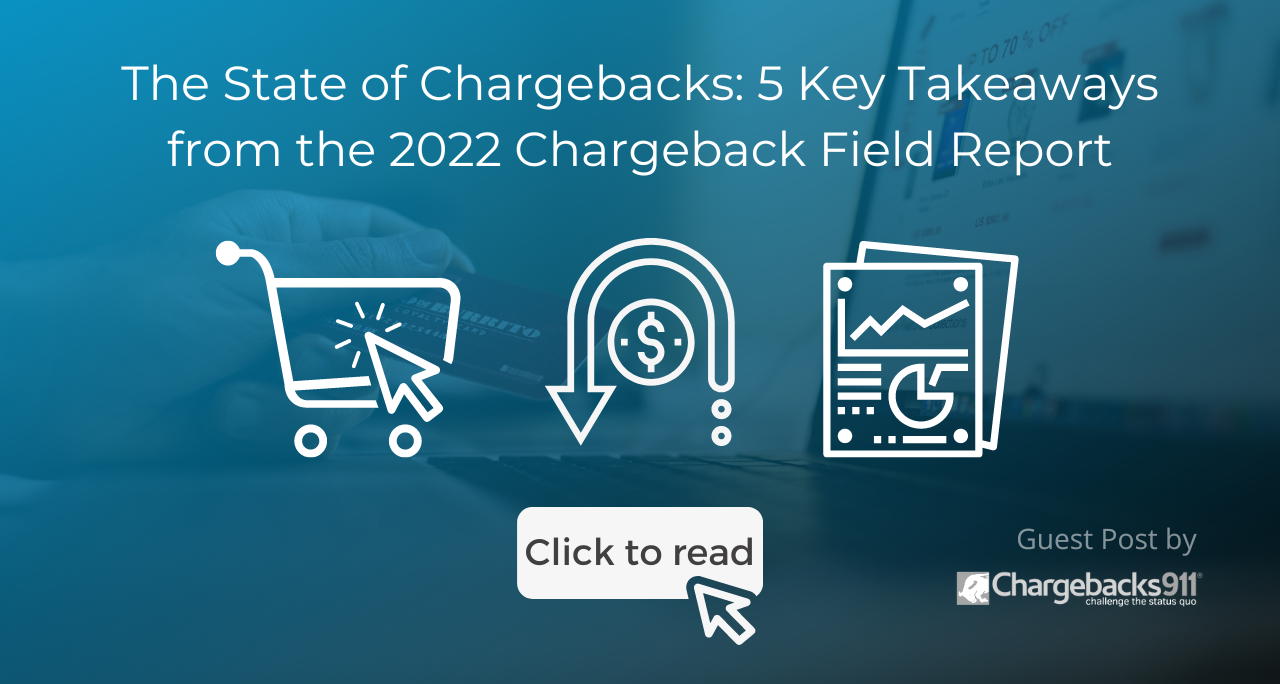 You could say that the digital marketplace is in a transition phase right now. That’s putting it lightly, but it’s ultimately a fair statement.

The question it raises: what is the digital marketplace transitioning into?

The recently released 2022 Chargeback Field Report, published by Chargebacks911, aims to shed some light on the situation through the lens of payment disputes. The report was compiled from an industry-diverse survey representing multiple verticals, scales, and chargeback risk levels to achieve the most accurate and detailed depiction of the situation possible.

Figures from the survey indicate that most merchants polled experienced a higher number of chargebacks compared to previous years. Also, the report indicated that merchants were embracing certain chargeback triggers and risk factors as a simple “cost of doing business.”

Accepting chargeback losses as inevitable is a critical mistake. But, without the benefit of greater insight, most merchants won’t even realize what they’re doing. In response, let’s look at five of the key takeaways from the report, and consider what lessons we can draw from them.

The terminology used in the chargeback space is changing. However, merchants are not keeping up.

As part of their chargeback process overhaul in 2018, Visa phased out the term “chargeback” in favor of “dispute.” Still, nearly 60% of the merchants polled generalized dispute processes as chargebacks, representing a 20% jump over the last year.

This seems insignificant at first glance. However, having two terms for the same process can create confusion, especially when stakeholders are inconsistent with their usage. Chargeback rules and processes are already complex and inconsistent across brands. Mismatched terminology can lead to more confusion and, ultimately, more losses for merchants.

More merchants seem to be reverting to the original terminology or using the two terms interchangeably. One explanation could be that the problem has achieved much more press in the last two years. A jump in online fraud came on pace with the pandemic spike in online shopping. This includes first-party fraud threats like friendly fraud and return fraud.

Alternative payment options and channels are emerging across all verticals. With the rise of online shopping and contactless payments, mobile wallets swiftly took center stage in the post-pandemic ecosystem. The explanation for this is reasonably straightforward, given that most people made purchases online during the pandemic or sought contactless payment options from cooperating retailers.

“Buy now, pay later,” or “BNPL” payments have also made substantial gains in popularity over the past two years. Nearly 30 percent more merchants offer this option at checkout as compared to last year.

BNPL options are a big hit with the average consumer. But, while it certainly behooves merchants to offer as many payment options as possible, BNPL comes with its fair share of concerns. To illustrate, consider the fact that roughly 60% of consumers surveyed say they have used BNPL to purchase frivolous items they might have otherwise not bought. This could lead to buyers’ remorse, which is one of the leading factors connected to friendly fraud (invalid chargeback claims).

#3. Friendly Fraud is Here to Stay

It should surprise no one to hear that friendly fraud is still on the rise.

Of course, the spike in online shopping due to the Covid-19 pandemic skewed the trajectory. We should take that into account. Regardless, friendly fraud has been on an upward trend for more than a decade, and losses are growing faster each year.

65 percent of the merchants surveyed reported an increase in friendly fraud disputes in 2022. This figure represents a 20 percent increase over pre-pandemic figures. It indicates that, despite industry hopes that the threat might wind down, friendly fraud remains a growing problem with no simple, clear-cut solution.

As more and more cardholders become aware that the dispute process generally works in their favor, the more likely it becomes that friendly fraud will continue its upward trend. Since it is often in a bank’s best interest to err on the side of their cardholders in a dispute, the problem will almost certainly persist.

Two-thirds of the merchants surveyed agreed that friendly fraud was a serious concern for their business. However, only an average of 17 percent felt their chargeback management solutions were effective. This statistic implies that many merchants accept chargebacks which, given sufficient insight, could be reversed through representment.

This attitude of accepting friendly fraud losses might be a side-effect of the complexity and cost related to the representment and recovery process. Even though 72 percent of the merchants surveyed reported that they responded to incoming chargebacks promptly, only 45 percent actually won their representment cases. The number dwindles even further when we look at net recovery rate, or the measure of disputes won as a share of total disputes. The average merchant’s net recovery rate sat at just 9 percent.

Where does this disparity come from? Well, it’s safe to assume that the merchants who actively engage in professional chargeback management are more likely to win their cases.

Comparing the numbers reported by merchants revealed that companies who leverage representment software and services through a platform provider tend to see much better results. These merchants reported a net recovery rate over 50 percent higher than those who managed the process internally.

#5. Mitigation is the Ultimate Key

How businesses analyze and respond to risk assessments is just as important as the revenue they spend on overhead and marketing.

Building and promoting a brand is essential to success in commerce, regardless of the channel in question. But, in an increasingly digitized world, it’s just as crucial that merchants invest in fraud and dispute mitigation technology.

Some companies who struggle with a high rate of chargebacks can devote entire departments to these challenges. Many, however, simply don’t have the resources to accomplish this. They end up struggling to achieve the same results despite lacking the internal staff, funding, or bandwidth. In the end, this calculation rarely pays off.

Many of these sellers would be better served by turning dispute management over to a third party. When combined with best practices and intelligent internal software, effective chargeback management can bridge the gap between rising fraud statistics and the merchant’s bottom line.

Additional insights and much more are available in the 2022 Chargeback Field Report. Click here to view the full study.

Monica Eaton-Cardone is the COO and Co-Founder of Chargebacks911, the chargeback management solution. Monica is an international entrepreneur, speaker, author, and industry thought leader. In 2011, she launched Chargebacks911 out of necessity after experiencing a void in the market. Created to aid online merchants in their efforts to safeguard sustainable eCommerce growth. Asides from her business ventures, Monica is an avid advocate for women in technology and business leadership.